This was the first book of the WACBHP, published nearly 20 years ago and updated in 2017.  This was one of the first books of it's kind in the UK and we know from feedback that we have received, that it inspired many more books about what has now become known as "the Windrush generation".
In 1948, Britain was just starting to recover from World War II. Thousands of buildings had been bombed, loads of houses were destroyed and it all needed to be rebuilt.
In the Caribbean, lots of young men and women had served in the British armed forces because at the time, many Caribbean countries were still under British rule and not yet independent.
After the war, some of these people answered an advert to come to Britain where there were lots of different jobs to do. 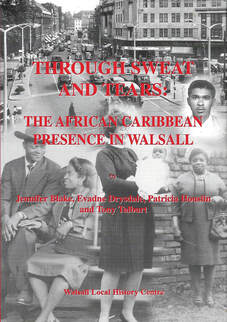 An overview of the chapters in the book:
Chapter one
Back– A-Yard
Marjorie Houslin
Conditions in the Caribbean Islands prior to migration to the UK

Chapter two
Strangers in The Midst
Tony Talburt
How the new arrivals were 'welcomed' by people in the UK
​
Chapter Three
One Room: You Eat in it, You Live in it, You
Sleep in it
Jennifer Blake
Housing and accommodation options for the new arrivals


This the 1st edition is now out of print.

However, the 2nd, updated and enhanced edition - "Through Sweat Tears and Triumphs - reflections on the African Caribbean Presence in Walsall" is available via
email:  wacbhp@gmail.com
Amazon website
completing the enquiry form on the website